The Andersson lab aims to understand how a multicellular organism, such as a human, develops specialized organs (a nervous system, a circulatory system, etc) from a single fertilized egg. As developmental biologists, we use mouse models, 3D cell culture, CRISPR cell lines, single cell omics, and patient samples to address fundamental questions with relevance for human health. For example, how are cellular proliferation and differentiation during embryogenesis coordinated with morphogenesis to achieve organs with the right function and shape to accomplish their jobs?

The liver is a highly versatile organ, with a shifting identity and function during embryogenesis and after birth. In the adult state, it is our largest internal organ and is responsible for hundreds of functions, from production of coagulation factors, and detoxification, to production of bile so we can digest fats and absorb fat-soluble vitamins. During embryogenesis, the liver is transiently composed of cells that will become liver cells, as well as cells that will become red and white blood cells. The embryonic liver has a well-developed tree of blood vessels that acts as a scaffold for development of the future bile duct system and is innervated by nerves whose cell bodies reside outside the liver. Thus, the embryonic liver is a nexus of cell types and organ systems, whose interaction during embryogenesis has not yet been fully understood. Deciphering the interaction of cell types and understanding the programs that lead to acquisition of the right cell fate, or establishment of the bile duct system, may allow us to design therapies or devise cures for the large number of diseases that affect the liver.

Alagille syndrome is a genetic disease usually caused by mutations in the gene JAG1, which encodes a ligand in the Notch signaling pathway. Children with this disease are often diagnosed when they have persistent jaundice (are yellow) after birth, revealing liver dysfunction due to an absence of well-developed bile ducts. Alagille syndrome also causes several other problems from heart defects to spontaneous bleeds. Our lab studies the role of Notch signaling in liver development, to better understand how bile ducts develop and in order to ultimately devise therapies for Alagille syndrome, and other diseases affecting the biliary system. Using a variety of technical approaches, as well as developing new methods when existing technology is insufficient, we aim to understand the interactions of Notch components in the embryonic liver, and decipher the interactions of liver cells with vasculature, hematopoietic cells and the nervous system during embryogenesis.

By resolving developmental principles, our aim is to develop therapies for congenital disorders, including Alagille Syndrome and neurodevelopmental disorders. In parallel, we are focused on devising high throughput gene-manipulation techniques to reduce the number of animals used in science, while improving the versatility and speed of scientific inquiry.

Andersson Lab is awarded the Swedish Foundation’s Starting Grant – an equivalent to the European Research Council Starting Grant. This collaboration between the Erling-Persson Family Foundation, the Kempe Foundations, the Foundation Olle Engkvist Byggmästare, Ragnar Söderberg Foundation and Riksbankens Jubileumsfond welcomes applications from researchers ranked A in the ERC Starting Grant, and recommended for funding, but for whom there was not sufficient funds in the ERC budget.

Read the press release here, and an interview here. We are deeply grateful to all the participating foundations for their initiative, in particular the Ragnar Söderberg Foundation that funded our Swedish Foundation Starting Grant in this round.

Organs are 3D & our analysis of pathology should be too. So we developed DUCT to visualize and quantify the 3D architecture of the murine liver vascular and biliary systems. – leading to new discoveries in Alagille syndrome. Now in bioRxiv!

An exhilarating highlight of the year: the International Liver Congress, organized by the European Association for the Study of the Liver (EASL).

Emma was elected the Scientific Committee of the EASL Governing Board. EASL brings together over 4,000 members, organizes a yearly meeting for over 9,000 attendees and aims “spread knowledge and expertise in best practices and the latest scientific breakthroughs in hepatology”, through education, conferences and more.

This year, Jan Masek, post doc, presented his ongoing and planned work as part of the Sheila Sherlock post doctoral fellowship he received.

Emma also gave a talk on the “Challenges women face in academia”, which you can view here.

All in all, a very exciting meeting, presenting new developments in basic, clinical and translational research, and opening the door to an exciting future three years as Governing Board member.

Registration to The Notch Meeting 2019 in Athens Oct 6-10, co-organized by Emma, is open now! Please register to guarantee a spot at this vibrant meeting! Lovely poster featuring blood vessels imaged by Simona Hankeova, PhD student in the lab. 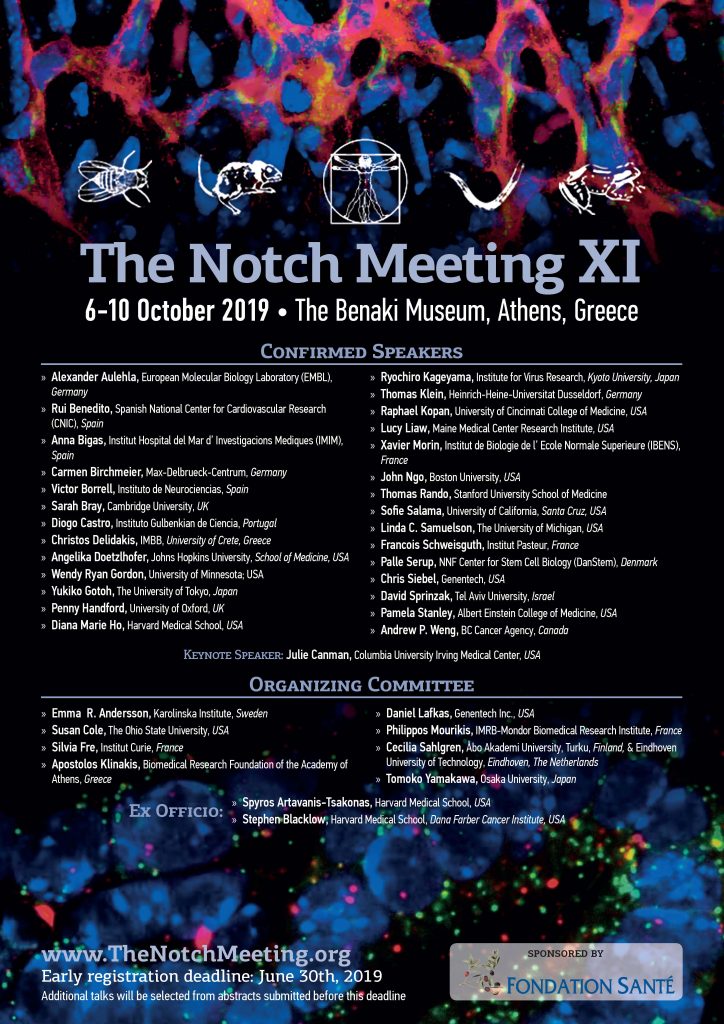 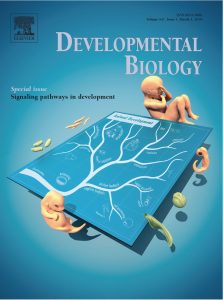 We welcome our new PhD student Sandra de Haan to the lab! 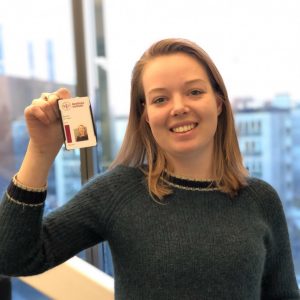 Our book chapter on Future Therapeutic Approaches for Alagille Syndrome is published. This book, with chapters from leaders in the field of Alagille syndrome, spanning liver pathology to bone defects, was edited by Binita Kamath and Kathy Loomes.

Our review on Calcium Signaling in Liver Injury and Regeneration together with Volker Lauschke is published in Frontiers in Medicine!

Emma attends the exciting Gordon Research Conference on Notch Signaling in Development, Regeneration and Disease as discussion leader. Lots of great talks, wonderful colleagues and a flash flood to boot.

Emma has been working as Guest Editor on a special issue in Developmental Biology on the Blueprint for life… The focus is signaling pathways in development, spanning different model organisms and concepts from ligand dispersal to lateral inhibition and autophagy. The Editorial Introduction, written with Jeffrey Bush from UCSF is published – looking forward to the full issue being ready soon!

Emma presents some of our work on Notch in liver cancer at the The 8th International Conference on Notch Targeting in Cancer.

Congratulations David Kosek on a successful registration seminar and welcome as our newest PhD student!

Today Jan Masek, post doc in our lab, recieved the prestigious EASL (European Association for the Study of the Liver) Sheila Sherlock post doctoral fellowship at the International Liver Congress! Congratulations again Janek! It was a great conference, and we struck up lots of new great collaborations! 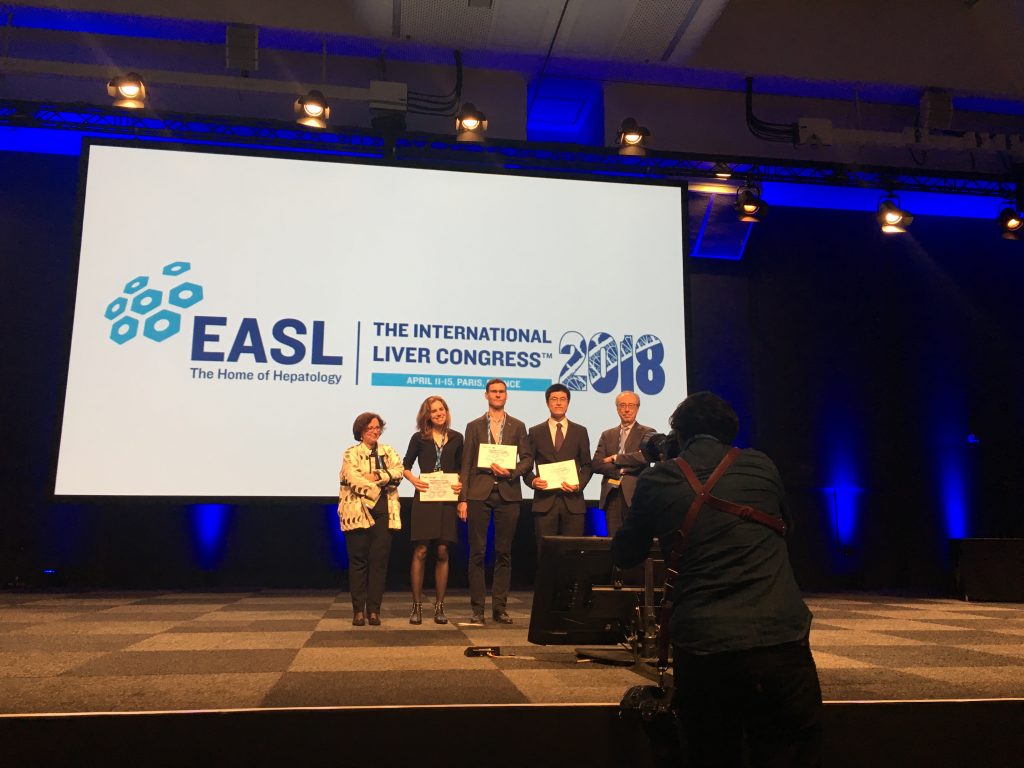 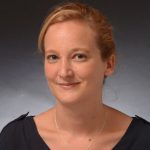 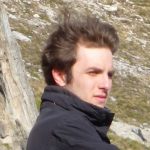 Congratulations Jan Masek, post doc in our lab, on being awarded the prestigious EASL (European Association for the Study of the Liver) Sheila Sherlock post doctoral fellowship! This internationally competitive post doc grant is awarded to two-three fellows in Europe each year. 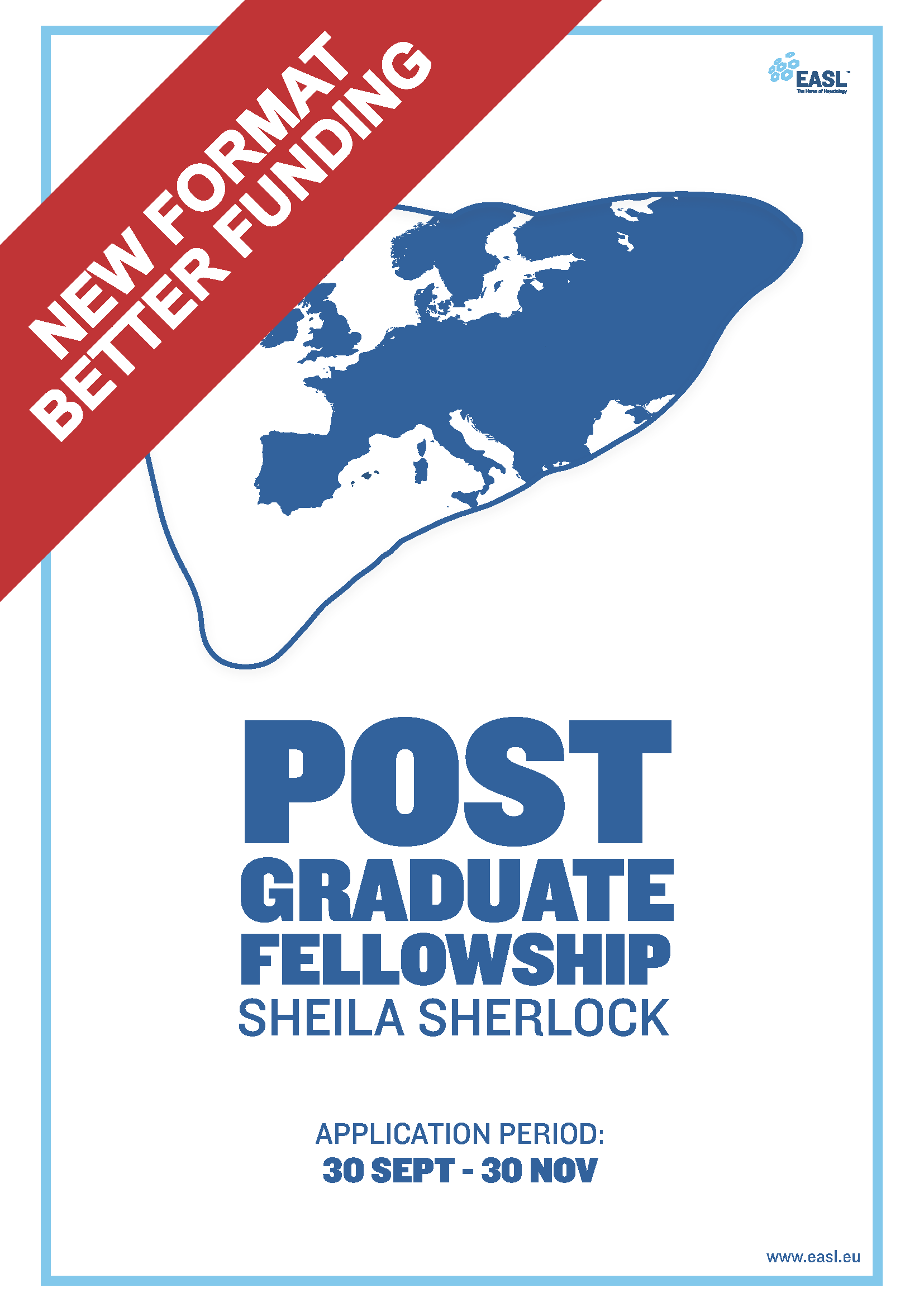 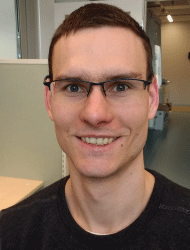 Jingyan He is officially registered as a PhD student in our lab at the Department of Cell and Molecular Biology at Karolinska Institutet. Congratulations, and welcome! 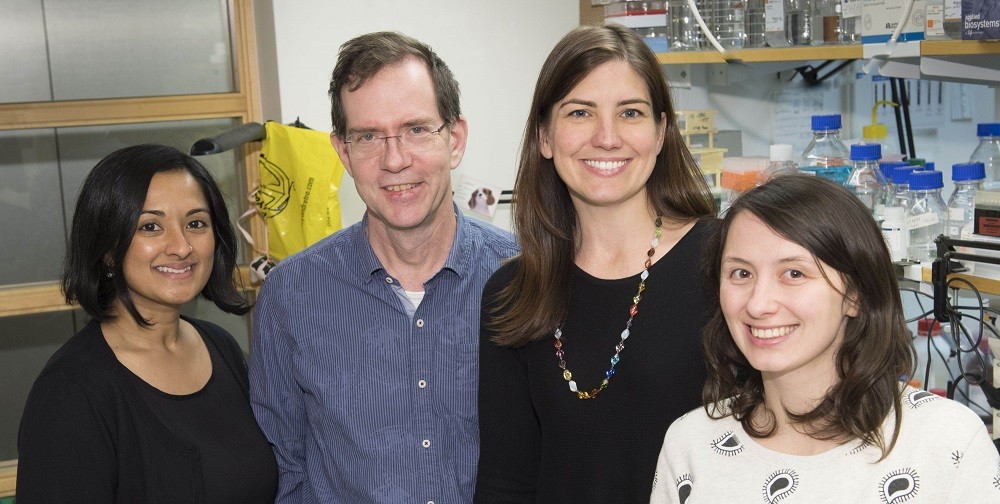 Our open access Gastroenterology paper is finally out! In this paper, we describe a novel model for Alagille syndrome, which we then compare with human liver samples from patients with Alagille syndrome. By cross-referencing with the Human Protein Atlas, we identify novel markers of bile ducts and show that the apical side of bile ducts is specifically disrupted. Finally, we show that the missense mutation driving the Alagille phenotype in the mouse model is Notch receptor selective – a completely novel finding with implications for ligand-receptor specificity.

Thanks to the Swedish Research Council/Vetenskapsrådet (VR) for continuing to support our 3R research.

The Swedish Heart and Lung Foundation (Hjärt-Lungfonden) has awarded the Andersson Lab a grant to study Notch signaling and stroke, focused on Alagille syndrome. Thank you to the Foundation, and the donors, for your meaningful support.

We welcome our newest PhD student candidate, Jingyan He, co-funded by a Chinese Scholarship Council grant. Welcome to the lab, Jingyan!

Emma attended the 2017 AASLD Liver meeting in Washington DC, USA – great to see so many of my liver colleagues, and discuss new models and future areas of research.

Emma acted as examinator/opponent at the PhD defence for Katerina Strakova, at Masaryk University, Czech Republic. 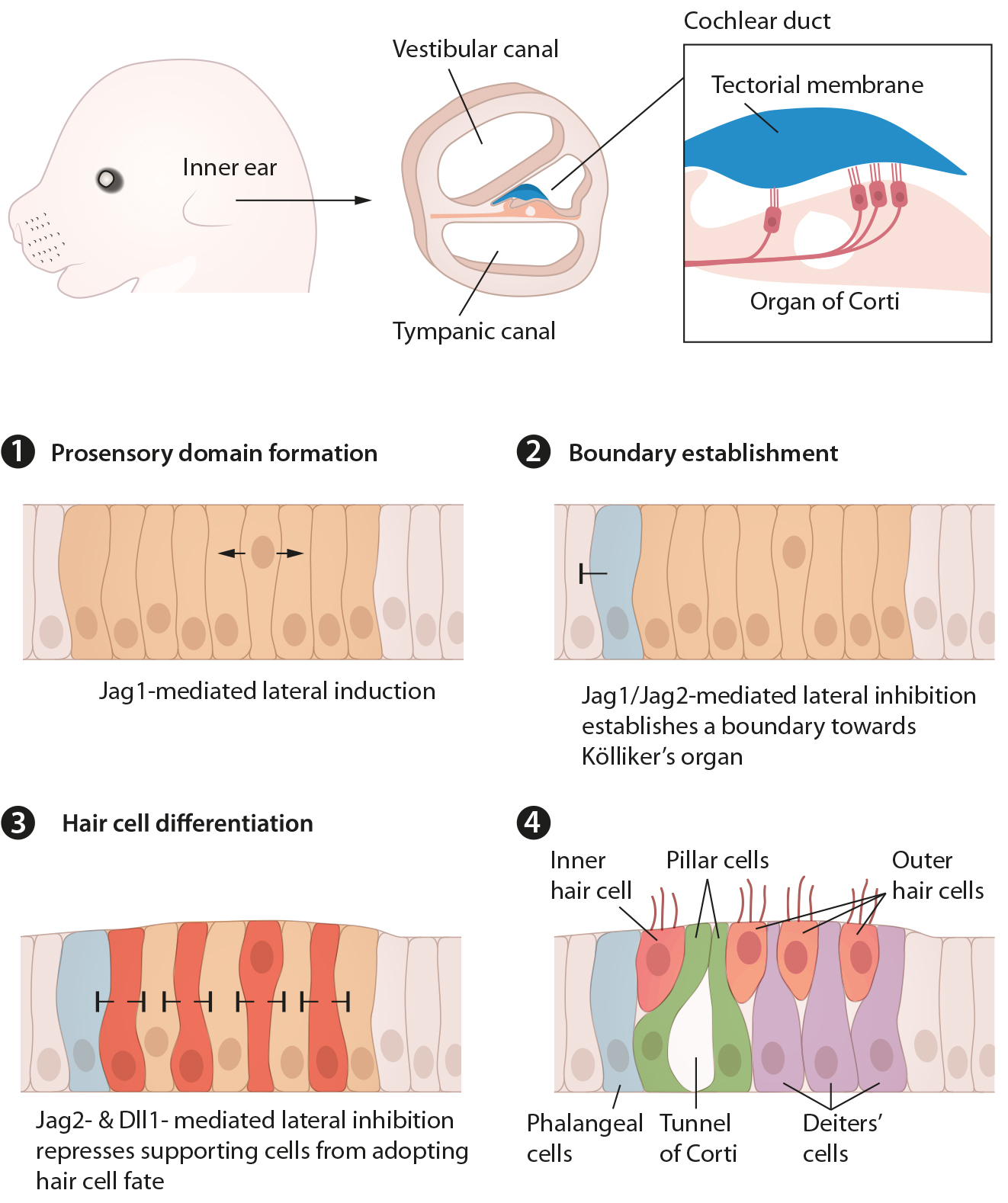 Emma gave a talk at Children’s Hospital of Philadelphia, with Kathy Loomes as host.

Emma presents at the University of Hartford Neuroscience Symposium.

Congratulations Afshan Iqbal on your PhD studies registration seminar! An intercontinental challenge, with Afshan presenting to the Doctoral Admissions board at Karolinska/BioNut, and Emma joining from New Haven over Skype, at 4am. All went well, and we are delighted to welcome our most recent official lab member!

Grateful and honored to have won the EASL Mentorship award, that supports me visiting a Mentor they matched me with, in this case Mario Strazzabosco – world leading hepatologist! Starting today, I will be networking, presenting our data all over the USA, establishing collaborations and planning grant applications, for the next month. Thank you EASL for connecting me to the liver community!

Aug_17_2017
Want to work at Karolinska Institutet in an international team studying mechanisms and pathways controlling embryonic development? We are looking for one senior scientist with expertise in liver development ( – position filled) and a post doc with expertise in microRNA biology (Apply here – application period extended). Deadlines approaching fast!
Aug 21, 2017
May_16_2017
Our review is out! Read about Congenital Notch disorders and how Notch controls embryonic development in the May issue of Development.
May 16, 2017 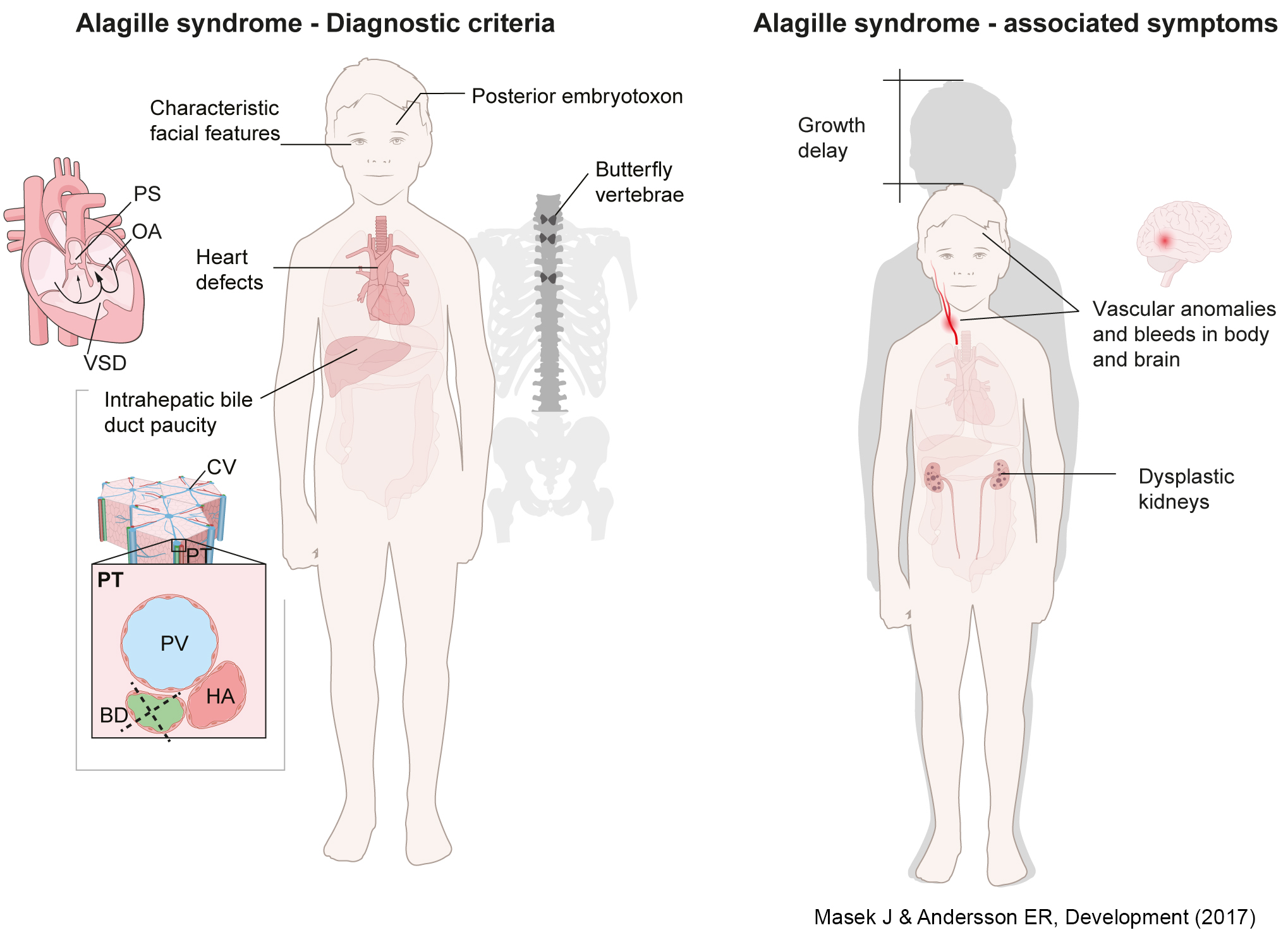 May_2_2017
Welcome to our new PhD candidate Afshan Iqbal and our new bioinformatician post doc Dimitri Schritt!
May 2, 2017
Apr_5_2017
Welcome to our new student Julia Lytchiér!
Apr 5, 2017
Mar_9_2017
Emma R Andersson is awarded the EASL Daniel Alagille Award! This award is given to one person in Europe under 40 for a groundbreaking project in genetic cholestatic liver disease. 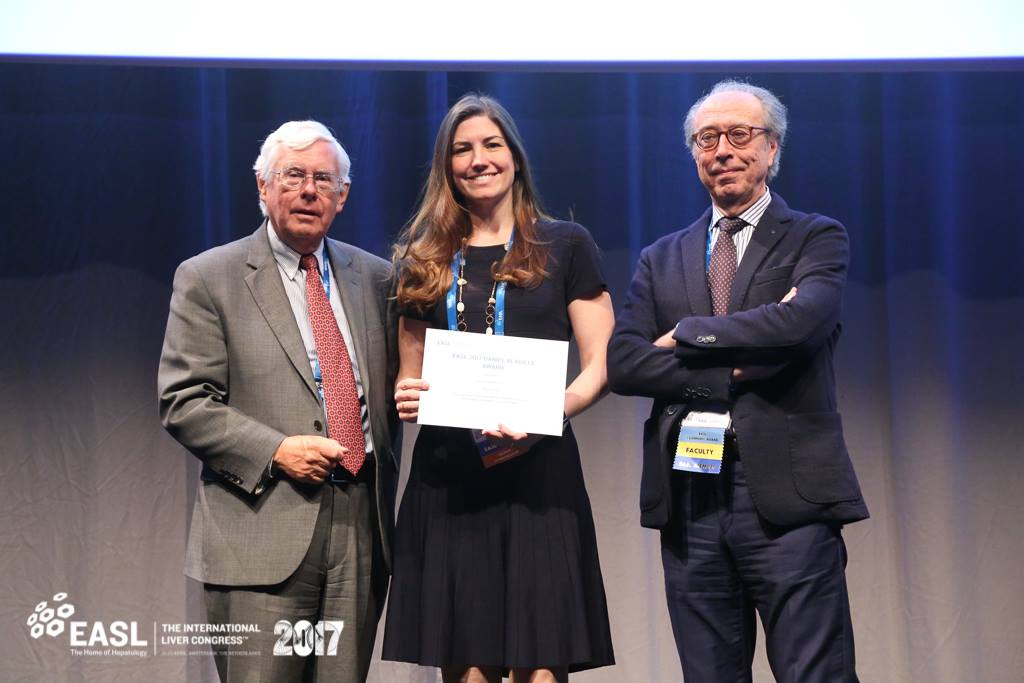 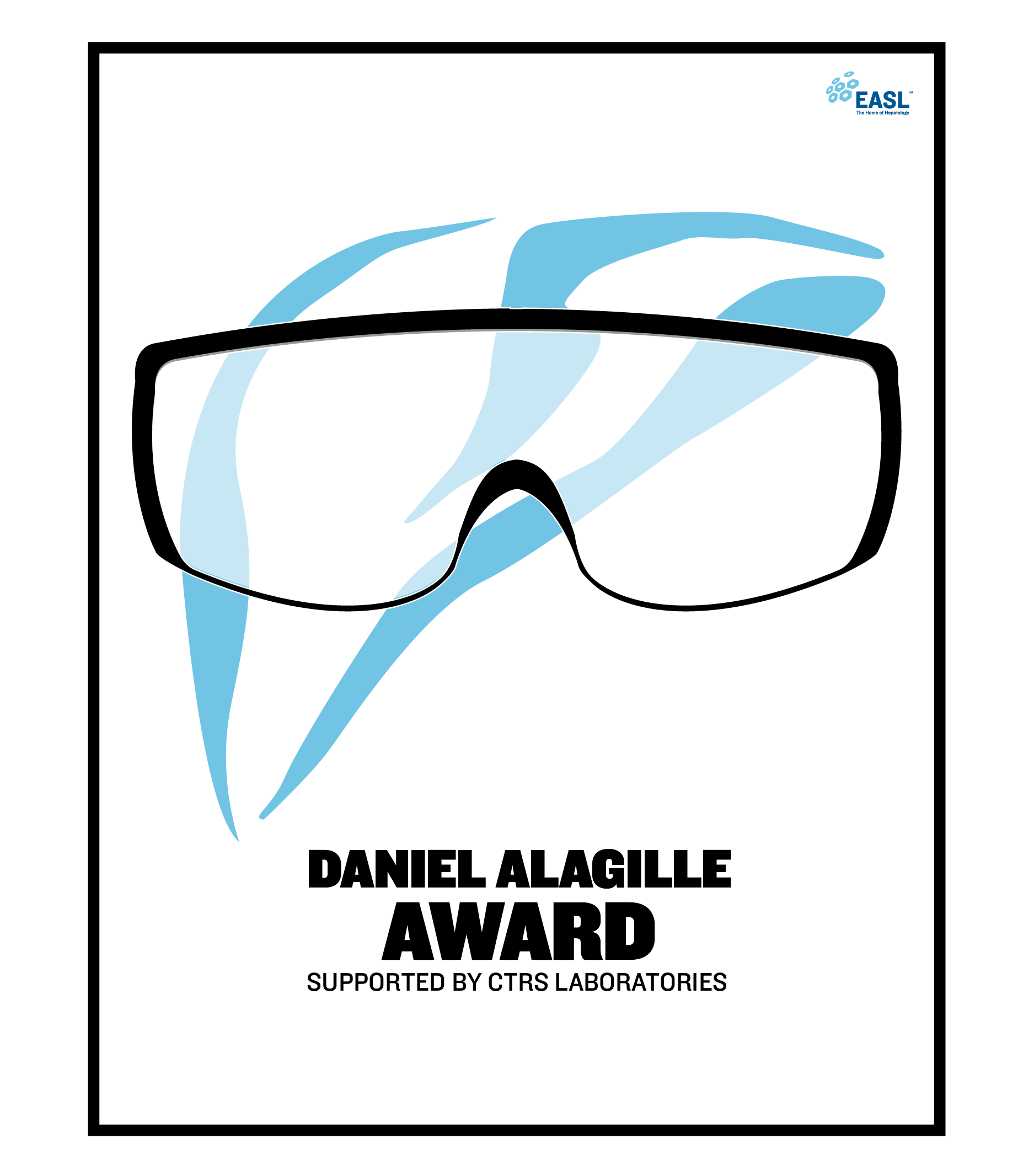 Mar 9, 2017
Feb_6_2017
Welcome to our new students Francien Grotenhuijs, Astrid Sanchez Bergman and Chérie Vervuurt!
Feb 6, 2017
Dec_6_2016
Jan Mašek (with Andersson Lab as applicant) is awarded a post doc grant from the Wenner Gren Foundation! We congratulate Janek and thank the foundation for their support!
Dec 6, 2016
Nov_23_2016
Our lab seeks a talented and passionate bioinformatician! To apply, please use the following link. – Position filled, we look forward to welcoming Dimitri Schritt to the lab!
Nov 23, 2016
Nov_22_2016
Congratulations to our post doc Jan Mašek on being nominated, and sponsored, by Karolinska Institutet and selected by the National Research Foundation Singapore to attend the Global Young Scientists Summit in January 2017, in Singapore!
Nov 22, 2016
Oct_5_2016
Katja Petzold (as main PI) and Emma R Andersson are awarded a grant from Knut and Alice Wallenberg’s foundation! This generous grant will allow us to build up a team and continue our collaboration investigating the role of miR structure in vivo, using ultaround-guided nanoinjection of the nervous system. For more info see http://ki.se/en/news/four-projects-to-share-143-million-from-knut-and-alice-wallenberg-foundation, https://www.wallenberg.com/kaw/sma-molekyler-styr-hjarnans-utveckling-och-cancer or http://petzoldlab.com/
Oct 5, 2016
Sep_23_2016
We are establishing a new core facility for production and development of virus for use in experiments. We seek an enthusiastic and organized person for the position of Core Facility Manager (labsamordnare). If you are interested, please see the following link: https://ki.mynetworkglobal.com/se/what:job/jobID:113571/where:4/
Sep 23, 2016
Sep_22_2016
Bravo to team “Top Notch” that represented the Andersson lab in style at the KI Race 2016, and crossed the finish line showing true teamwork! 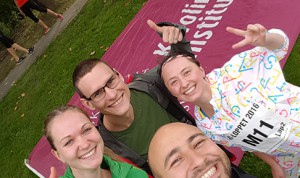 There are many ways to make it to the finish line. #kiloppet   A video posted by Karolinska Institutet (@karolinskainstitutet) on Sep 23, 2016 at 8:37am PDT